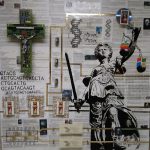 The original idea for Technology Will Save Us All came almost 3 years ago with the death of my sister’s cat. His name was Fred and he came from Lesotho, in Africa. Out of college my sister joined the Peace Corps and went to Africa. There she adopted Fred and at the end of her commitment decided to bring Fred home to save him from being made into a hat. That was 20 years ago now. Fred became part of the family and everyone loved his grace and kindness. Well, he grew old and his health failed and passed away. I didn’t work far from my sister’s house so I attended Fred’s funeral in the backyard. When I returned to work I fell into a reflective reverie about mortality and the meaning of life. I decided to type into Google, “What is the meaning of life?” As in all things Google had an answer. It came in the form of a Wikipedia article. The article was extensive and comprehensive and covered a lot of philosophy and religion I was already familiar with. That was the inspiration for the eponymous work “Technology Will Save Us All.” My mind formulated a composition. The background would be a collage of the Wikipedia article on the meaning of life and I would add painting and sculptural elements. Originally I was struck with the image of Christ crucified on a cross made of cell phones, to juxtapose the suffering with our modern conveniences. Later, in the final work  it became a crucifix of circuit boards. In the lower right hand corner I envisioned the figure of blind lady justice holding up her scales. In one scale would be the Windows logo, and one the Apple logo, a comment on how in common conversations we are windows or mac people and how we judge the other as right or wrong. I had originally envisioned a copy of Michelangelo’s Sistine chapel “The Creation of Adam” with binary code or DNA. I did add diagrams of DNA but opted to not use the almost cliched touching fingertips. I added elements from the history of computer science like vacuum tubes with Catholic medals affixed to them like a little shrine, and computer punch cards. A compact disc echoes Jesus’ halo in the upper right. This was the first work conceived, refined over years of thought, and the first one executed. I hope you enjoyed the back story to the seminal work of the series. Once I had the idea, more concepts with the same method started flooding in. As I purchased more items to use it blossomed into a whole series.